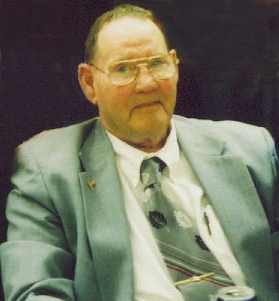 Leslie Day was born on August 12, 1931 near Conway, New Hampshire. He served his Country in the United States Army during the Korean Conflict and spent time stationed in Germany. Back home he raised 5 children. To accomplish this he worked many jobs including 15 years as a police officer. He is currently the Quartermaster of the Veterans of Foreign Wars Post 8393 in Milton, NH and a member of the American Legion. Leslie has been and continues to be an active volunteer in both organizations.

Leslie was diagnosed in 1983 with “Limb Girdle”, a form of Muscular Dystrophy. This debilitating form of the disease makes it difficult for him to stand up straight. His inability to stand correctly causes extra pressure on his lungs making it hard for him to breath. He is progressively losing the muscles in his neck and legs.  Despite these difficulties, having survived three heart attacks, by-pass surgery and back surgery he is always there for his children and his friends.

Leslie is the father of one of our riders, Tammy Day. Tammy says this about her father; “I believe he has overcome Muscular Dystrophy because he does not let it get him down, he is a fighter. He always thinks of others first and no matter how much pain he is in you can count on him. He is my best friend”.